Deep Thoughts by Dr. Jordan: Isn't it crazy that without the most beautiful woman in Europe, we all would have forgotten about Harald I of Denmark?

All the sheets were handed in, the scores were handed out, the prizes were handed over, and all the beer was all handily consumed by all. The night had become another stitch in the long, luxuriant fabric of the IRCPQ's history. Another square of two-ply on our novelty roll of toilet paper, if you will. The quizmasters and the quizmastees had all gone home. The night was over. Everything was done.

Everything, except the weekly recap.

The most important thing to know is that Dr. Jordan had yet another virginal quizmaster taking a shot at doing our job last night. This week's bold volunteer was a man from IMSA who shall henceforth be known only as Greggles.* As Robin tells me, a new quizmaster's first round selections offer us a unique window into their soul. If that is true, then Greggles has a soul filled with U-boats, Omega Men, Illinois, Cheap Trick, Ronald Reagan, comets, and lots and lots of backing bands. Not bad.

It's also been said that grizzled, old veterans of quizmastering's rounds offer a glimps into what they ate for dinner last night. A window into their gut. We learned last night that Dr. Jordan's gut is filled with Number Two, MI6, 10 Little Indians, potent potables of all kinds, and one Ben Franklin quote short of a whole round on presidential quotes.

Throughout the night there was some excellent chugging. I particularly enjoyed watching PJ, who finds chugging too easy, casually begin his beer a second or two late and still manage to pull off a tie. Woman and Husband each showed off some chugging skill, and is it just me, or was that the first time they've ever been seen in the same place at the same time?

In the end it was Random Chaos, continuing their consistent streak of organized thought, getting another win for the night. Perhaps the randomness will end next week as we bend time to end the month of August early, all so we can make room for the Nerd Night Mixer. By the way, have you seen this amazing artwork made by our very own Jon Wunder? 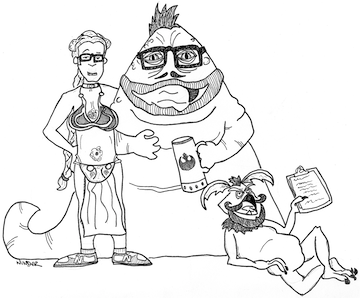 See you next week.

* - Only slightly less important than that is breakfast.

I don't know about you, but I'm guessing there will be a round on Panamanian fauna, or Panimals.

This isn't a hint. It's just two quizmasters out on the town. And, there's nothing wrong with that. 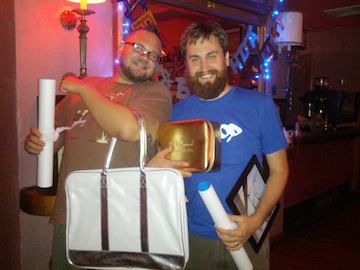 Ah, summer camp. The place where lasting memories (and fears) are formed. When I was a young man*, I spent one week every summer at Camp Bonner in North Carolina. Every year my tent was in the Iroquois campsite which was pretty conveniently located in the middle of the whole camp, though it had one oddity. At the head of the trail leading to the Iroquois campsite was an old tree with a peculiar arrangement of knots and limbs about 12 feet from the ground that made the tree look like it had a perpetual erection. As any typical, camp-going teenager would, we cleverly called it the Bonner Boner Tree.** Not only did the tree have a boner, but at least once during the week the tree got some unlucky camper's underwear as a tasteful decoration. How's that for having your shorts raised up on a flagpole?

Where was I going with all this? Oh, yeah. I'd like to thank our guest quizmaster, Field Sergeant Jen, for hosting on Wednesday and delivering such a nostalgia-inducing round about summer camps. Dr. Jordan also had a round that brought me back to a time in my youth when I was left to me own primitive devices in a cruel and unforgiving wilderness - ah, mathematical word problems. We quiz-goers also got to demonstrate our knowledge of dogs, Johnnies, the Breakfast Club, and opening sentences from classic literary works. That's what I call a hell of a night.

Not only that, but we had new t-shirts to win this week. What could be better? Perhaps some shirts that didn't look like they'd been balled up in a suitcase for the last month could have been better. I do apologize again that they were a bit wrinkled, but when I smuggled them away from my former employer I was more concerned about getting a variety of sizes for you to pick from than keeping the shirts nice and smooth. I'm not sure Jen will ever forgive me, but I hope everyone else can.

Finally, the word is out that August 29th will be the Nerd Night Mixer at the IRCPQ. You're probably wondering what that means exactly. As soon as I figure it out, you'll be the first ones to know. Stay tuned.

* - The Evil Master Phil?
** - I spent most of this morning searching the Internet for pictures of the Bonner Boner.

I just got a tip from tonight's guest quizmaster, and it's...

Jason Alexander and Holly Hunter, together for the first and last time.

Why is Apolo Anton Ohno at the Summer Olympics? Did he think there was some kind of Celebrity Dancing with the Stars: All Stars event to participate in? Was he upset that Ranomi Kromowidjojo showed up with a name even cooler than his own? Perhaps he just couldn't keep himself away from such a fiercely competitive environment. If that was the case, he should have been at the Indian Road Café Pub Quiz on Wednesday, where records and egos are shattered every single week, and no exceptions were made this week. Dr. Jordan brought the competitive pot to a quick, competitive boil when he started the night with a round all about the Olympics. But, he didn't stop there. We also got to identify flags from around the world and list the happiest nations in the world. For those of us "Real Americans", that was about as much internationality as we could stand. Fortunately, Fozzie was in the house as a guest quizmaster and brought a bag full of good old fashioned American pop culture! Not only did we get to piece together backwards movie plots, but we also got a common bond dedicated entirely to Fargo.* Most importantly, both Dr. Jordan and Fozzie kept the free beer flowing through the night. And, that's really what matters.

If all that wasn't enough to fill the bar with Apolo Anton Ohnos, we also had the triumphant return of OJ the Imposter (aka The New Daddy In Town). His new baby, Optimus Prime, was a big fan of the quiz, but she asks that there be more questions about girls ...and babies ...and transformers.

* - So I'm told. I regrettably had to leave early to go make a fool of myself somewhere else.